This past month has been very busy. It seems as if we’ve had company all month long. If you count the whole mission we have! There were three or four days that our family didn’t.

If you remember from the last blog post the first part of the month we had a team from Hill crest here to help out. Two days after Hillcrest left, James and Ruth came. They were the first of quite a few people from Holmes County, Ohio that came for Jon and Veasna’s Wedding. James rode along with Dad quite a bit with while they were here. One of the more exciting things they did was go look at a house out in the village that we are thinking about renting. The whole family wants to move out there, but we are still getting numbers around and waiting on the board’s go ahead. It might not be such a big deal, but the house needs some remodeling, which might get expensive .

The first week of April was Jody’s last week of teaching. She was going home at the end of the month and letting Chandra fill her position, and there was a long break after the seventh for Khmer New Year. So she decided to just stop then and work on getting ESL supplies and worksheets organized. On the 7th we had our last day of English Class before the 2 week break for the Khmer New Year/Wedding. The Khmer school only took off a week and a half for the Khmer New Year, but with Jon and Veasna’s wedding at the end of the week we decided just to make the break two weeks long.

The morning of the 14th we woke up to quite a surprise. Some doors that we had shut and bolted before bed were open, and nobody in our family had opened them. After looking around a bit, we noticed that somebody had taken the keys for the gate and opened that and stole a few things. Whoever it was took a strange variety of things: my backpack for English teaching (but he nicely emptied out most of the contents), several pairs of flipflops, a truck battery, and a bicycle, along with a couple dollars of money. The scariest thing was that he was in the house. The only way that we can figure out that he got in was through a second story door that we forgot to close. We had never really worried about that door because there are no stairs. That  was the only door that was open, and all the windows have metal grates over them so that has to be the place he came in. Then the next week he came again. This time all he took was two truck batteries. I’d say it’s about time we got another dog…

Sunday the 16th a lot of Jon’s family arrived here in Siem Reap. Jon and Veasna had rented a house for the whole family to stay in, which was very nice for them. Those of the immediate family that didn’t show up on Sunday, got here the next day. We didn’t find much out from them, especially that first week. They were too busy running here and there trying to get stuff ready for the wedding.

On that Thursday, Dad took the board members that were here (James, Larry, and Delbert) to a very remote village that we had drilled some wells in. Well we got somebody else to drill them with a machine since we couldn’t drill by hand. They took along a submersible pump to put in the one well so most of the village can get water from there. It sounded as if they had a really good day.

The 22nd was the big day for Johnathon Gingerich and Veasna Bophin. Their wedding started at four in the afternoon. Well it was supposed to. It ended up getting pushed off for a little bit, because true to style, a lot of people were a little late. The wedding was a very nice “American” wedding with a Khmer twist. During the service there were children playing in the aisle and running around in the back. The reception was a lot more like a “Khmer” wedding. People kept coming in as the evening went on to eat and talk. Jon and Veasna had a bridal table, but they barely sat there. They were happily buzzing around talking with all the guests. When we asked some of the Khmer people what they thought of the wedding they said that they really liked the vows. In the Khmer wedding they wouldn’t verbally commit to each other as strongly. 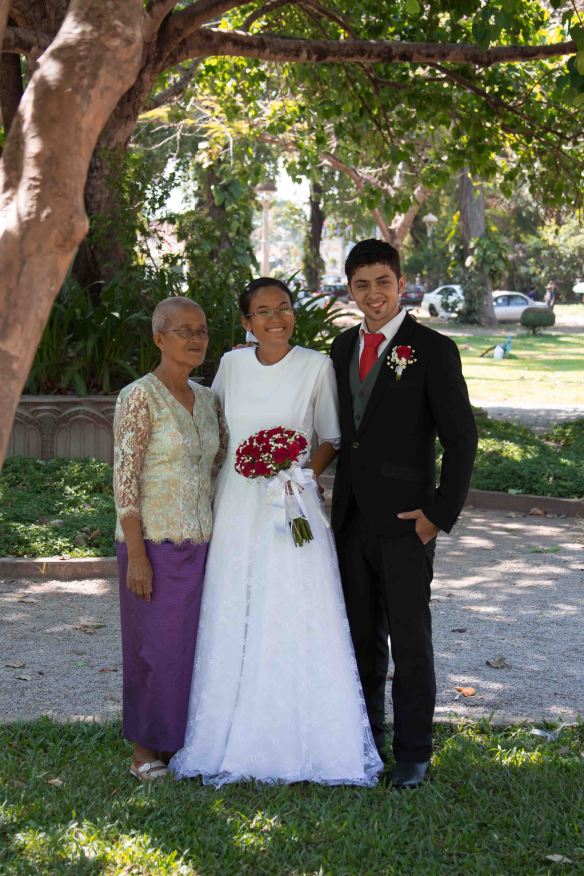 Jon and Veasna with her Grandmother.

Monday the 24th we started up classes again after our break. Attendance was really bad the first couple of days, but slowly more and more students started dribbling in until now two weeks later we are up to about full force.

Tuesday the 25th Wesley Miller, who was here for the wedding, was involved in a moto accident. He got banged up pretty badly with a concussion, three smashed/broken toes (they ended up amputating one), a broken collar bone, and some broken ribs (which poked a hole in one of his lungs. The Hospital sent him down to another hospital in Phnom Penh, where he was for 4 days. Then after he was back here in Siem Reap he was readmitted to the hospital to put a metal plate on the collar bone which had slipped way out of place. He is not allowed to fly till May 16th, so he has an unplanned extension to his stay.

The last week in April was full goodbyes. Almost all the people who had come over for the wedding went home that week, but more importantly (at least in our lives) Jody left for home on April 30th . She had been staying with our family while serving here as an English teacher for a year and a half. She will be really missed…

We’ve been having some really nice sunsets recently.

P.S.    Sorry I didn’t have more pics to go with the blog this time.