The title might be a little deceptive, but it is true. Only it is two different schools instead of only one…

We (the English teachers) had decided a while ago that we were going to either slow down or stop having English classes when the Khmer school takes their summer vacation. The children’s attendance usually slacks way off when their school isn’t going, and some of the teachers were getting burned out from planning lessons. The teaching isn’t that bad they’d say, but planning the lessons is just work. I was the lucky teacher that had the students that still didn’t know the ABCs and therefore took very little lesson planning. So I was pushing to keep having some classes, especially since I really didn’t know what else I’d do during the day. 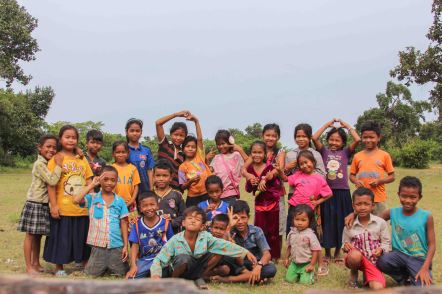 These three girls are some of the most improved from the last year.

Around three weeks ago, my tune really changed. My sibling’s school books arrived at the post office, and less then a week later we started school. I got drafted in to being the teacher for the Dallas, Heather, Carissa, and Forrest until we can get a teacher to come over and take the job. That first week was hectic. I was trying to organize the school books, find all the answer keys, and set up lesson plans while still teaching two English classes. It might not have been to bad if I hadn’t procrastinated so long. I was going to do it on Saturday and Monday since we wanted to start school on Tuesday, but Saturday was one of a long list of busy Saturdays. So that left Monday to do the work I had planned for two days. I found out in a hurry that i should have planned at least three days, but eventually got most of the job done. Tuesday the 16th we started school (we wanted to start early enough that we can take a furlough in early may of next year). That morning from 8:00 to 8:30 I was so busy telling the three oldest what I had planned, that a very excited first grader didn’t even get to start school before I left to teach English. Within the first week, I saw that it wasn’t going to work to try to get the three oldest started and teach a first grader before school. So I asked Jody if she would mind teaching Forrest. She is going to teach him until the new teacher comes for which I am very grateful. 🙂 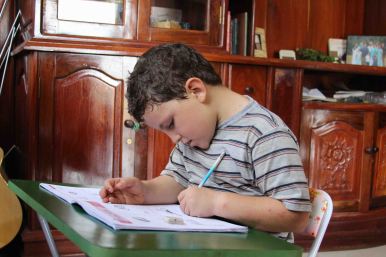 During this time, we kept discussing what we wanted to do with the English classes. We finally decided that we would stop teaching English for 2-3 months, but we would go out every Friday to do more of a Kid’s Club.  Last week, we told them a Bible story and played games with them. While the attendance wasn’t just amazing, it was better than I expected it might be. We’ll see what happens with it as we go on from here.

The last Friday that we taught English we took out hot dogs and brownies and spent the evening with the children. Most of our regulars came. I think there was around 80 total.

Do you remember the string of busy Saturdays that I mentioned. The last 7 or 8 weeks we have had something come up. Whether it was helping people do modifications to their houses, help move a church, or natives wanting to come visit our house. We have been extremely busy. It was bad enough that one of the guys that works for us said,”The day that we usually rest is busier than the days we work.”

This past week and a half we had a team from Mountain View Nursing Home here. One of the main things they helped us do was build a bathroom for the school/church in Bakong. We still don’t have it completely finished, but they definitely helped us a lot. The girls also helped with cleaning and baking around the house. While we gave them a lot of work to do, we also had a lot of fun. Volleyball, Scotland Yard, and making bamboo firecrackers (for lack of a better term) were among the highlights for fun. We also took them to the floating village which was probably more of a highlight for them than me, but it was still fun. 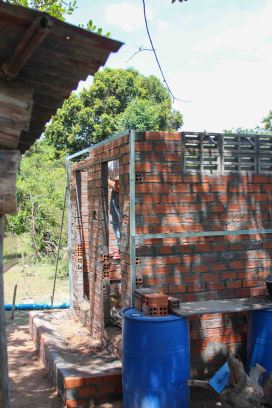 It was a little further along than this when we finished, but I don’t have a pic.

While in the fishing village we handed out Bible story books.

Until next time, Luke for the Helmuths!

be joyful in hope