In a lot of the post that have been done, we have mentioned well drilling, but we have never really gone into the specifics. A lot of that comes from the fact that Lori was doing the blog at first and that really wasn’t her thing. Then when I started writing it was old news. If you aren’t interested in the well process skip to the bottom:)

A normal day drilling starts at about 8:30-9:00 in the morning. It would be cooler to start earlier in the day, but Jody, Ryan, Austin, and I have Khmer class in the morning. By the time we are finished with Khmer class, Frank and Chhom usually have everything needed loaded up on the truck and are ready to go. Recently they have been going a lot further away to drill than they did when we first came two years ago. While there are still people close by that need wells, the places that we are drilling at further away need clean water much more than those close by. The village that we are currently drilling in is especially needy. Their main water source is a river going to the lake, or ponds close by…The water is a runny milkshake consistency because of all the clay sediment in it . Some of them would use this water to cook with ect. The drive to this village from Frank’s place is about 30 min.

Once we get there, we set up. This consists of getting the electric pump connected to our water filtering tank. Connecting the hose and first drill bit to the pump, and running wire from the generator to the pump. If there is a water source close by, they will set the gas water pump up to run water from there into the filter tank. If there isn’t water close enough to use the gas pump, we have to haul water in our big tank on the truck. While this is ok, using the gas pump is definitely a lot easier.

The blue tank in the front is the filtering tank. The water comes up the temporary casing and goes into the far side of the tank. The water flows over a lip into the near side. This catches most of the dirt on the far side. You can also see the water tank on the truck that we use. Ryan (the one in red) is putting on a drill rod.

After set up comes prayer, every morning right before they start drilling they say a prayer asking God to help the work go smoothly, help them to get good water, and to bless the people they are drilling for.

After the prayer they start the generator, then the pump. The pump pushes water through the steel drill rod, so all they have to do is turn the drill rod by hand. The water pushes the dirt back up the hole. Each drill rod is about three meters long. The drill bit is a piece of flat steel about three inches wide welded on the end of one of the drill rods. You clamp an handle over the drill rod to give yourself something to turn on. (The pics explain it a lot better.) Once they have drilled the first drill rod down, they take it back out and put in a temporary casing. The temporary casing is just a piece of steel pipe that is just big enough around that they can fit the bit down through and is 2 meters long. All this casing is for, is to keep the dirt on the top from caving in and washing out.

Here you can see almost the entire set up. The electric pump that pumps the water down the well, the hose, and the drill rods on the right. 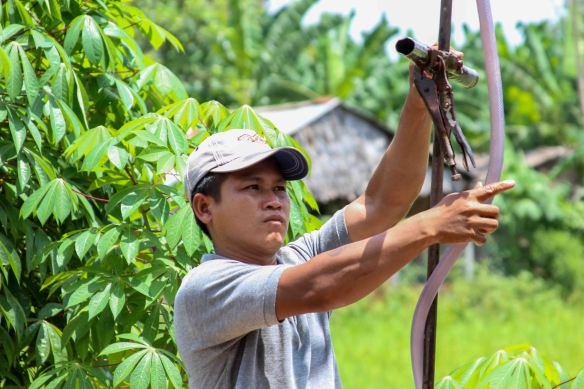 Chhom drilling. You can see the handle that gets clamped on the drill rods so you can pick it up and turn it

Once the temporary casing is in, they put the drill bit back in and drill until the end of the drill rod is even with the top of the casing. Then they lift it a little bit (to make so it stops digging in the dirt on the bottom)and unscrew the drill bit from the hose. Once the hose is unattached, they attach one end of of the next drill rod to the hose and then the other end to the drill rod. After starting the pump, they are good to go for another three meters of drilling. After the three meters is finished, another drill rod is added Ect.

Putting in the casing

This is what happens when you blow air down to clean it out. Makes an excellent way to play a joke with someone new around 😉

The depth that they stop at depends a lot on the soil they are drilling in, but it also depends on the area. They like to stop when the bit is in clay mixed with a little sand. If they stop when the bit is in all sand, the end of the permanent casing will not have a good base, and after a few months the sides of the cavity are likely to fall in, clogging the pipe. Usually they put the casing in 16-20 meters deep and drill another 6 meters. In some areas there is so much iron in the water down that deep that they will put the casing in only 6 meters and stop drilling the cavity as soon as they hit water. In the village by the river there is so much clay that they put the casing in at six meters then drill another 20 meters just to try to get a decent amount of water. The clay is so thick that the water has a hard time seeping through. Depending on the area and the well, when we put the gas pump on the well we can fill a 5 gallon bucket up in around 7-10 seconds. Not all of the wells are this good but around Seim Reap a lot of them are

We usually put a black steel handled pump in, with a little cement pad around it so they have a clean place to wash clothes ect. On a decent day, they can usually drill 2 wells, this doesn’t include installing the pump, but on a day when things aren’t going right and they hit really bad sand or rock it can take 3 days to do one well. 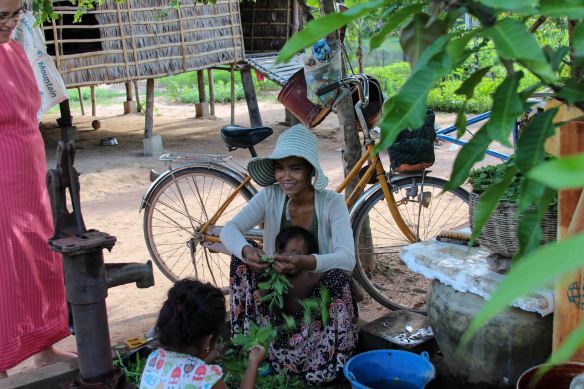 This is the pump I tried to describe:)

Now for all of you that have been bored with the well info, here is a little more for you:) The other day I was out cleaning the yard and i saw a brilliantly colored bird fly into the window of the house. I don’t know if it was just because it was still learning how to fly or if it saw a reflection on the window and thought it could go right through. Either way it was a little stunned and landed in the yard. I immediately went running for my camera. I had seen this kind of bird from the road a couple times and wanted to take pictures of it, but never had a chance. When I came out with my camera, it was still sleeping and kept sleeping until i had taken my fill of pictures.

Mom, Jody, and Alaina came out and were admiring it with me for a few minutes, when Alaina asked, “Whose bird is this?”

She got this shocked look on her face then exclaimed, “Well God can share!”

After I was finished taking pictures, I carefully picked it up to see if it was knocked out or just sleeping. As soon as I touched it, it jerked awake and started squawking. Soon it stopped and sat there calmly as i stroked it. I wanted to get some more pictures so i handed it to Jody who let it sit free on her hand. After a few seconds it flew into our shop and sat there for a few minutes before flying off. After searching online awhile I figured out that it was a Blue Winged Pitta. 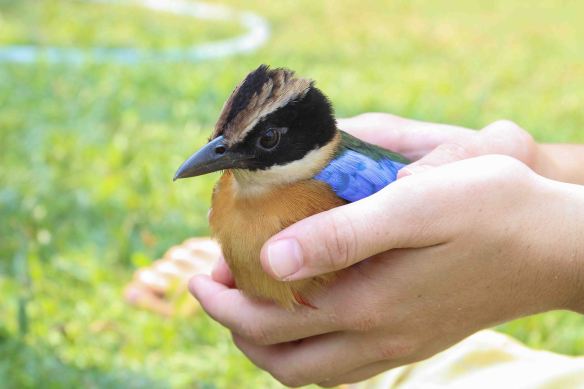 A couple days ago we went out on the Tonle Sap lake ,with friends from the fishing village where we are drilling now. With plans to  hand out Bible story books at another fishing village about an hour boat ride away. They said that the children in this village had most likely never seen foreigners before, and they thought that we would enjoy giving them books. Well, once we got there the village was almost deserted. There were 5 people in the village and they told us that all the others had left that morning to go visiting other places for Khmer New Year. We were a bit beat out that there was nobody around, but we still had fun.

Local fisher woman taking a break during the heat of the day. 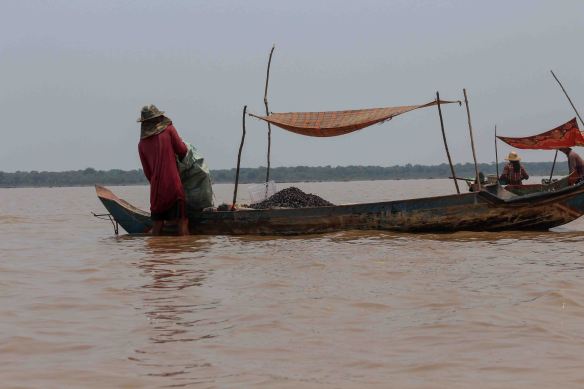 The harvest today is snails…We were a couple hundred yards from shore and the water was only knee deep.

The village we came to see only to find it was deserted. It took an hour each direction to get here.

Last month was Alaina’s birthday. She was one very excited girl.

On a different note…If anybody has suggestions of things you would like to hear about comment below. That would make writing this blog so much easier as half the work would be done:)

Thats all for now.
Luke for the Helmuths.