Hi y’all! English classes today were cancelled due to an extended water festival holiday, so I decided to take advantage of a free afternoon and catch you up on life here.

Last Saturday Matt told us to expect four extra people at church on Sunday. We had no idea who it was going to be, but were excited anyways. When they arrived on Sunday morning, Carissa came up to my room, and told me “The lady has a green dress on, and there’s a little girl too!” =) I soon had the privilege of meeting Packy and Laura Sporre, along with their children Melinda and Lyndon, who had come all the way from Wisconson. They were visiting friends in Thailand, and as I understood, Packy had been in Cambodia before and wanted to come back. (I missed some of the details.) I guess it was through the friends in Thailand that they heard about our mission, and decided to visit for church. We loved having them, and wished it would have been longer. It’s always refreshing to have Christian, English speaking company. Come back anytime, y’all! And for the rest of you…if you ever find yourself in Cambodia, please stop by! =)

“Bunnies”, really. Forrest’s last two puppies are no longer around. Brudo just went missing one morning, and then the next dog, Toby, took a trip on the truck to the neighbors house, and there he stayed. He just couldn’t get it in his head that the porch was not the place to do his business, and we were all tired of it. Veasna’s brother, Hane, loved the dog, and so they agreed to take him. Since then, Forrest has been begging for another pet, but Dad wasn’t quite ready to take just any mutt in again. A few weeks ago, he came home from town with three fluffy bunnies, much to the children’s delight. Carrisa, Heather, and Forrest named them Cottontail, Oreo, and Peter, but Little Miss Alaina just calls them “bummies”. The children have really enjoyed them so far, and are already looking forward to the day when the bunny population starts increasing by leaps and bounces. (If these bunnies are anything like mine were when I was little, it won’t be long before we have a yard full!) 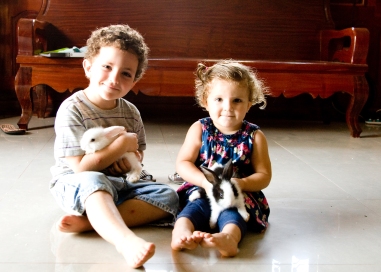 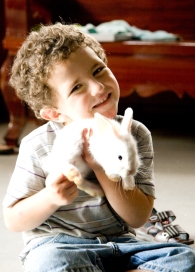 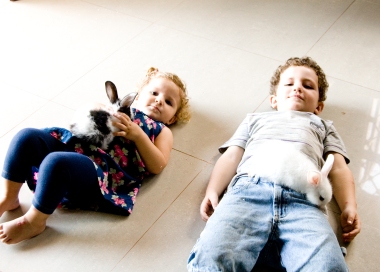 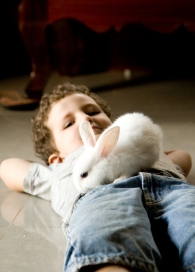 We had a wonderful break this summer from the strange maladies of Cambodia. Recently, though, we’ve been struggling with strange bites and flus again. The other morning Heather and Forrest both woke up with a huge blister on their arms. The blisters were full of pus. Frank and Kompeak thought they were maybe spider bites, and Dad and the pharmacist decided they were blister beetle bites. Eventually the blisters popped, and Forrest’s especially has been “weepy”. Heather’s is healing up pretty well, and Forrest’s is on it’s way. I’ll skip a picture of those sores for the sake of the squeamish.

Alaina’s poor little legs are also covered with some sort of painful, pus-filled bites. We’re not sure if they started as mosquito bites and then got infected, or if they’re something else. They probably wouldn’t be so bad, except she just picks and picks at them, and so they don’t have a good chance to heal. Covering them with band-aids doesn’t help – she just picks those right off too. We’ve tried putting pants and leggings on her too, but they’re both too short to keep all of the bites out of sight. Forrest and Heather got some then too, and one of Forrest’s in particular seemed to be really infected. The bone by the bite was sore when he walked, and he started running a fever. Dad took him to the pharmacist, who prescribed an antibiotic and said if he’s not better in a few days he needs to see a doctor. He’s been feeling much better now, PTL, so we’re hoping that will take care of it for him. Mom’s been faithfully putting Betadine cream and band-aids on Alaina’s legs at night, and we hope they’ll improve soon too. 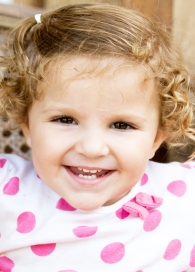 The bites don’t seem to affect her sweet smile too badly. 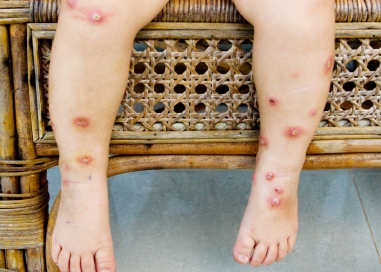 Those bites reminded me of when I was much younger, and had lots of scars and scabs from too often scratched mosquito bites on my arms. “If you keep picking at those scabs you’ll have scars all over your arms, and then the boys won’t like you,” teased a much looked up to lady one day at fellowship dinner. I think I knew she was teasing, but the thought worried me a little at that moment! I don’t remember if I heeded her warning or not, but the memory sure stuck and I have to grin whenever I remember. =)

Our dear Veasna turned 17 last month! Jasmine, Shaila, and I took her to the Blossom Cafe for a little birthday celebration. The Blossom Cafe is ranked #3 of nearly 450 restaurants in Siem Reap, and it deserves that rating! Delicious, beautifully decorated cupcakes are their specialty, and I’ll be happy to support the trainees in their efforts. =) If you come see us here and want to go out for coffee, that’s the place to go!

Veasna was fascinated with the fondue cakes at Blossom Cafe, so I decided to try my hand at a marshmallow fondue cake for her birthday cake on Sunday. Humph. I’ve decided that birthday cakes weren’t to be made in Cambodia. It seems every time we try, it’s too warm and the frosting gets all runny. I thought maybe the fondue would be better, and I think it would have been, had I not started with a cold cake. It was looking great, and the fondue was yummy, but then the cake started condensing. By morning it was a rather sad sight. The fondue was all sticky and wet looking, not to mention the tiny black ants that had discovered the treat during the night. The ants disappeared with a little coaxing though, and after setting the cake in an air conditioned room with a fan blowing on it, it looked nearly normal. 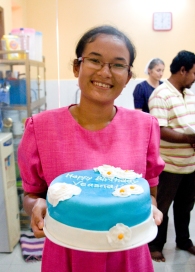 And just for your information, no, it’s NOT supposed to be a hat, and those are NOT eggs on the cake. =) One man who was here for lunch was wondering why we would put eggs on a cake. I think it made a bit more sense to him once he heard the eggs were actually supposed to be flowers. Oh well…the cake was good, and that’s what counts! So much for my cooking adventures…

Mom, Dad, and Luke also had birthdays in October. Luke is 18 already, and is a dependable young man. He is great with kids, and does well at the English class he teaches. Mom and Dad are a few years older. =) They spent a day together in Siem Reap acting like tourists – something mom has wanted to do for a while. There are so many neat little tourist shops in town, and we don’t find the time to go to many of them.

On the other side of our compound wall, in the house right beside Sen and Mum’s lives Contea. I met her on one of my trips to talk with Mum about something. She was uncomfortably pregnant, and had a bad cold. The doctor had given her some medicine to take, but she was afraid it would hurt the baby. She asked me if I could look it up online and see if it was okay to take. I was happy to oblige, and that was the beginning of our friendship. Once we had pizza for supper, and the next day Mum asked me what we’d baked the night before. “Pizza,” I said. She told me Contea had smelled something cooking, and she just knew we were making pizza. Oh, she wanted pizza! “Maybe it’s cinnamon rolls,” Mum had said. No, she still thought it was pizza. We had some leftovers, so I warmed them up, and took a plate of pizza over for her. She was so excited! She’d wanted pizza for so long, but her husband wouldn’t buy any for her.

Since then, often when I go over to talk Mum, Contea and I will start talking. She’s a sweet lady, and has lots of questions about Christianity, but doesn’t seem very open to the idea of accepting Christ yet. She says she’s not a Buddhist…she just thinks as long as we do kind things to others that’s good enough to get her somewhere good when she dies. Please pray for me as I interact with her…that she could feel the love of Jesus, and that I would have wisdom and clear, understandable words when she asks hard questions.

Anyways…finally, in August she had little Mr. Ahvia. He’s a great excuse to run over to visit. Someday I want to capture one of his adorable dimpled smiles on camera and share it with you. =) 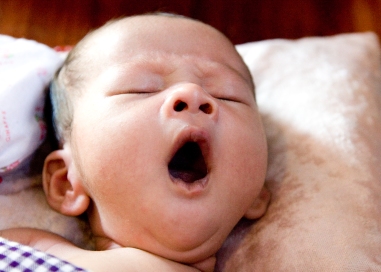 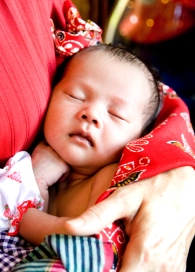 The main thing occupying our minds these days is preparation and excitement for the arrival of Charles and Donna’s family. The girls’ paper chain counting the days til Charles’s get here is getting shorter and shorter. Just six more ‘sleeps’! We can’t wait! Then the day before Thanksgiving an IGO team arrives…fun, but even more fun since my dear friend Crissy will be on that team! So yes…there’s lots of excitement going on around here. It will be a busy time, but so much fun.

Have a happy Monday, y’all!

6 thoughts on “Bummys and Bites”