No…don’t worry. We’re not heading home for another funeral. We are all quite alive and well. Now. Maybe it’s not nice to have a title like that, but you know in writing class they always tell you to use an attention grabbing title. Do I have yours? =)

Last Sunday after church and dinner were over, Sheila came running into the kitchen with her friend Sopea. She wanted a knife. She chose one and went running back outside, telling me over her shoulder that Sopea wanted to cut something. I went out to the porch where a little crowd was gathered. Austin was sitting on a chair, and Ryan was digging into a painful inflamed bump on Austin’s arm with his ever ready pocket knife, squeezing out little bits of pus. I asked what was going on and someone told me that Sopea wanted to get some banana leaf juice to put on some sores on Austin’s face. Oh. So that explained the knife. Sopea found the leaf she was after and headed back to the porch. Austin quickly rolled his sleeve down and told Ryan, “Don’t let her see that!”

Austin had some sores around his mouth. He said they were pimples, and when he popped them they got itchy. He would scratch them and then they would scab over, and then it would happen again. Sopea saw them and claimed it was from getting too hot, and that the banana leaf juice would help heal them. So here she came with her banana leaf. She whipped a tube of hot pink lipstick from her purse, put some on the oozing end of the banana leaf, and then dabbed that mixture on Austin’s sores. The hot pink splotches all around his mouth looked amusing, but he was a good sport about it.

Everyone soon left for home, and mom and dad headed out for the afternoon Bible study in the village. I was upstairs in my room for awhile, then went down to mom and dad’s room to get something. There was Austin checking his temperature. I felt his forehead and he was very hot. The thermometer read almost 104 degrees. Hmm. I looked at the bump on his arm again, and it was very hot and swollen and quite painful. Right away Staph infection came to my mind, and I grabbed the iPad and started ‘researching.’ The symptoms described in the articles I found sounded very much like Staph infection, and every place I read warned that if a fever accompanied a boil-like sore, the person should be treated with the proper antibiotics.

As soon as mom and dad got home, I told them what was going on, and after dad read the articles I had found, he took Austin down to the little pharmacy down the road. They were soon back with an antibiotic, painkillers, and a cream to put on the boil. I breathed an inward sigh of relief. Hopefully the antibiotics would do their job, and Austin would be fine.

Monday he was still laying around most of the day with a fever, and his arm was still swollen and painful. We all figured the antibiotics just hadn’t kicked in yet. Mom looked in her faithful “Be Your Own Doctor” book, and that night she applied the charcoal poultice it prescribed. The next morning we thought the arm might be a little better. The portion of his arm that the poultice had covered was less red. He still had a fever though, and Tuesday evening after supper I took another look at his arm. The angry red had returned, and the swelling was only spreading. I felt uneasy – shouldn’t the antibiotics have a good grip on this thing by now?

So I got the iPad, and once again read the what the internet had to say. By the time I was done rereading the numerous articles about staph infection and the effects it had if prolonged, I was worried. Words like “life-threatening”, “sepsis”, and “death” rattled around in my brain. I imagined life without my dear Austin, and soon I was near tears. I returned to the kitchen to finish sweeping the floor, and my voice trembled as I sang “How can I fear, Jesus is near, He ever watches over me. Worries all cease, He gives me peace…How can I fear with Jesus.” But I did fear. I told mom how I was feeling, and she thought maybe we should say something to dad. I went out on the porch where he was talking on the phone, and impatiently waited for him to hang up, praying that he would listen to my fears and act on them.

Finally he was finished and I told him how worried I was. “Couldn’t you call Dr. Sealy and ask him about it? We could email him pictures if that would help?.”

Dad thought a bit, and said, “He probably won’t answer, and my phone battery is almost dead, but I guess it doesn’t hurt to try.” He located the number, and dialed. Please God, help him answer, I prayed. And answer he did! Thank you! Dad described the symptoms to our doctor, and was soon off the phone. “He says he thinks that arm should be lanced as soon as possible. He doesn’t think we should wait ’til morning, so I guess I’ll run him in.” After calling Matt about which hospital we should go to, Dad, Austin, and I headed to the Royal Angkor International Hospital. 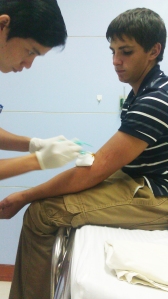 This was when we went back the next day to get the incision cleaned, and his arm looked much better.

I was immediately impressed with the hospital. It was much bigger, cleaner, and more professional looking than many of the little clinics around town, and the staff were very helpful. They got Austin registered and we were ushered right back to the little emergency care section. Several nurses and a doctor came over right away, and took a look at Austin’s arm and checked his temperature. Dad showed the doctor the meds the pharmacist had given, and he just shook his head. The doctor definitely agreed that the sore needed to be cut open, and took us right to an empty room where he started his preparations. I was disappointed when after cleaning the arm in preparation for the cut, the nurse told us that only one person could be in the room with Austin. The main reason I came along was because I wanted to watch. Dad tried to convince them that two people would be fine, but they stuck to their guns and I had to wait out in the lobby. It wasn’t too long before Dad and Austin came walking out, Austin’s arm wrapped up in gauze. He was looking fine, and said it didn’t hurt too bad.

We went over to the desk to pay and get the new medications. Austin and I were talking about the procedure while dad was paying. I turned for just a bit to read a sign behind me, when I heard a ‘plop’. I turned around, and there was Austin laying on the floor! Dad and I rushed over to him. “Austin! Are you okay?” He sheepishly raised his head a bit, and said, “Man, that felt weird!” His pupils were dilated and he was all sweaty. He said he just felt dizzy, and suddenly there he was on the floor. He doesn’t remember falling – only hearing a ‘plop’. Apparently watching the doctor work on his arm made him woozy, the same as it does for Ryan and Dad. Dad went back to finish paying, and I sat with Austin on the floor for a bit so he could get his bearings straight again.

Down the hall I saw a man walk in the door. He walked toward us and just stared. I thought he must have had some relative in the hospital, and was just very curious, but he came up to us and said he was a doctor, and “What happened?” “He passed out for a bit after he watched the doctor work on his arm,” I explained. “Well, here, let’s get him to a room and check him out!” he said. Austin was reluctant to go, and dad assured the doctor he would be fine, but the doctor insisted, and gently helped Austin to a room. I followed them in and heard the doctor tell the nurses that came to help, “He was laying out by the desk! He passed away!” He soon changed it to “passed out”, and I contained my giggles until the nurses got Austin laying down in bed to rest and left. Then I told dad and Austin what I had heard, and we laughed and laughed. Such are the joys of living in a country where English is a second language.

After Austin had rested for about fifteen minutes and the doctor was satisfied that he was fine, we went home to tell the rest of the family how Austin had “passed away”, and we all laughed some more. I haven’t seen mom’s funny bone tickled so hard in a long time. =)

We were all relieved that Austin had not “passed away” and that he was going to be fine, thankful for our wonderful doctor in the states, and ultimately thankful to our Heavenly Physician for the healing he was bringing.

And we were thankful again the next morning when Matt brought us the bent bike wheel from Dallas’s bike. That morning on the way to school Dallas had assumed the person on the moto behind him knew he was going to turn into Matts’, and had turned in front of him without signaling. The moto driver couldn’t stop in time, and slammed into Dallas’s bike wheel, sending both Dallas and the driver flying off. They were both unhurt minus a few scrapes. Had the moto struck the bike a split second later, it could have been much, much worse. Praise the Lord for safety…all of us who drive have had close calls, and it amazes me how God always takes care of us.

Well, the Saturday work is finally done, and it’s time for a good Saturday night rest. Have a wonderful weekend y’all!

5 thoughts on “The Day My Brother Passed Away”