Yup…here is the long-ago promised post about my fun little trip away from here with Jasmine and Theresa. I think I shall refrain from telling you the trip’s actual dates, lest you decide the news is too stale for enjoyment. Oh, and for this trip I decided to leave my big camera at home so I wouldn’t have to drag it around everywhere, hence the lack of good pictures. Okay, everyone ready? Let’s go! =)

During Theresa’s time spent here with Jasmine, she and Jasmine kindly asked me if I wanted to go on a little trip with them to Phnom Penh, the capital of Cambodia. I was all for that idea. We set off for the bus station one Thursday morning, all excited about our upcoming adventure. Our excitement dwindled a bit when we saw the bus. Our (more expensive than they were supposed to be) tickets had been bought at the wrong place, and so the bus was of the dumpy sort. Our assigned seats were already occupied, so we resorted to the three empty seats at the very back of the bus and tried to make ourselves comfy. We soon learned that each seat had its pros and cons. Seat #1 was relatively comfy but had little to no fresh airflow. The bus’s tiny bathroom (whose door had no latch) was situated right next to this seat, and the most repugnant odors escaped the room and wafted to the nose of Seat #1’s occupant. Seat #2 had slightly more air, but this seat was equipped with a most bothersome bar with no apparent purpose other than to dig into one’s leg. Seat #3’s occupant had to deal with a window latch poking her shoulder, but the air con was closer to her than the others. The air con, which we had been forewarned could be quite cold, was almost non-existent. We, whose seats were right on top of the bus’s very warm engine, nearly roasted as the bus sped along, swaying frightfully and coming dangerously close to the steep ditches. Several long, sweaty hours into the trip the people seated in front of us apparently felt warm enough to open the window we shared with them, which offered some relief from the stuffiness. With the relief, however, came billows of dust, which settled on our sweaty skin in an instant orange-ish tan. Needless to say, we were quite happy when the eight hour ride was finally over and we had arrived in Phnom Penh.

Us on the infamous bus…

But that was only the beginning of our adventures. A very interesting tuk-tuk driver took us to the Angkor Mithona guesthouse, loudly practicing his self-proclaimed “Californian” accent all the way. “Yo man! Wuts up man?” He was a bit too strange and bold for our liking, and the business card he gave us with many admonitions to call him if we need a driver found its way to a little stand in our room and there it stayed!

Then came the hotel drama. One of the other girls had booked a room for us beforehand, and had told me which guesthouse it was and what the price was. I looked for it online, and to my dismay the only room in the guesthouse which came out to the price she had quoted to me was a dorm room. I could only imagine what kind of people we might end up sleeping next to…oh shivers! Maybe I was mistaken. But no, the site she had booked the room on didn’t have a picture of the room, and when she read ‘dorm’, she was thinking that we would be booking the whole dorm. By that time, it was too late to cancel the reservation without incurring a large fee. We decided to try the room, hoping against hope that no one else would be ‘hard up’ enough give up their personal space and book a bed in a dorm room. Maybe we’d be the only ones in the room. Or maybe this was all part of God’s plan, and there would be some needy person in there that we could witness to.

All our brave aspirations fled when the hotel clerk opened the door to our room, and the first things Theresa and Jasmine saw were a pair of feet sticking off the end of one bed and three “Occupied” signs hanging from various bunks. Huh-uh! There was no way we were staying in there. Jasmine gave me a wide-eyed, horrified look, and I asked the man if there wasn’t another room we could stay in by ourselves. It took several tries for him to understand that we didn’t want to sleep with anyone else.

Finally he led us and our luggage up to another dorm room on the top story, this one empty. Exhausted, we told him this was good for now, and he left. After we caught our breath, we looked around a bit and noted that there was neither bathroom nor AC in the room, and the door to the room was paneled with windows, through which any curious person could peek at these strange young ladies. Nope. Not gonna do it.

With a sigh, Jasmine and I left Theresa to guard our luggage and trudged down the five steep flights of stairs to ask the bewildered man if there was an air conditioned room that we could have. Eventually we got our point across…we want a room to ourselves with a bathroom and an air con – that’s all. So he led us up to the top story, and showed us an empty, air conditioned men’s dorm room which we could have all to ourselves. Yes. Anything empty and cool looked wonderful. Back down the stairs to do the paperwork, then up to the top story again to get Theresa and our luggage, only to realize I had taken the wrong flight of stairs. So back down the stairs we went, then up the right stairs, then down, hauling our luggage, and up again. By that time my legs felt like jelly, sweat was running down my face, and I was close to tears. “Why?” you say? YOU try climbing forty-five long steep flights of stairs loaded down with someone else’s heavy luggage. I for one never want to try it again, and don’t understand why in the world that place doesn’t have an elevator!

After taking a cold shower and relaxing on our beds for a while, we got a good laugh out of our trip so far. It really wasn’t funny, and yet it was simply hilarious. None of us felt very motivated to do anything that night. After we felt we could conquer the stairs once more, we trudged down and ate a delicious supper at the guesthouse restaurant, then wandered down the street to a mini-mart for some snacks to take to our room. Sleep was heavenly that night.

After breakfast the next morning, we spent the day shopping and sightseeing. We went to a monstrous market in the morning, and then went to the Choeung Ek Memorial, aka the Killing Fields. This particular killing field is the site of the brutal executions of more than 17,000 men, women and children, during the Khmer Rouge under the leadership of Pol Pot. We took an audio tour of the killing fields, and spent a few sobering hours walking around, quietly observing the mass graves and the preserved human remains, listening in horror to the stories of torturous genocide. We were all lost in pensive thought on our ride back to the guesthouse. I simply cannot fathom the hatred that must have consumed the men that did those evil things to human beings. Learning more about what the people of Cambodia suffered during the Khmer Rouge helped me understand more clearly why Cambodia is the country it is today.

My family, along with Frank and Chum, ended up coming to Phnom Penh Friday afternoon then, as dad wanted to look for a mini-truck. That evening we all went to the Soriya Mall. Wow. I didn’t know how much I missed shopping in ‘real’ stores! That mall seemed huge after the markets and Lucky Mall in Siem Reap…a nine story mall is pretty big any way you look at it, I guess. We girls were delighted to spy a Dairy Queen while driving around in town, and knew we’d have to stop there. So Friday evening that’s where we went. Jasmine and I were quite content while our blizzards lasted. Ice-cream takes on a whole new meaning after living over here for awhile. Next time you go to DQ or Sonic, think of me. =) After DQ we went to the night market, where Jasmine got her self portrait drawn (that was fascinating to watch!) and finally back to our lovely cool room. 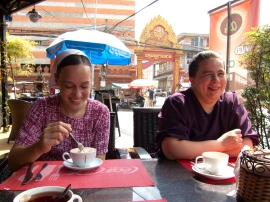 Our tuk-tuk driver stopped and bought us masks to keep out the abundant dust. 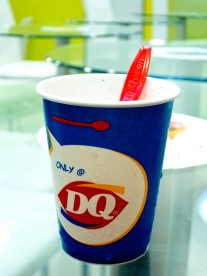 It was so neat watching the very talented young man draw Jazzy!

The next day while the guys went truck shopping, we girls and my mom fabric went shopping at Psah Thmai (New Market). That was quite the experience. Definitely the biggest market I have ever been to, or ever care to be for that matter. The hordes of busy people and the vastness of the market were somewhat overwhelming. We finally found the fabric section though, and had great fun. Fabric for $1.25 a meter…I think yes! =) It was here, though, that Jasmine had the misfortune of having her wallet stolen. That definitely put a damper on the day. When Carissa found out about it, she sweetly told mom, “Jasmine can have my wallet if she wants to.” I guess she didn’t understand that is was what was IN that wallet, not the wallet itself, that was so special.

A van driver had brought my family to Phnom Penh, and since the men did find a mini-truck to suit our needs, there was room for us girls to catch a ride home with my family instead of taking a bus. We started home around noon Saturday afternoon, and got home around 9 that night. Oh yes…I can’t forget to mention the delicacies we had at the place we stopped for lunch. Frank bought crickets and a fried tarantula for us to try. I refused to taste that big nasty creature, though the cricket wasn’t terrible. Dallas fed Alaina a bit of the tarantula’s leg (no, mom wasn’t looking) and she just made a face and took another bite.

Anybody care for a bite?

All in all, our trip to Phnom Penh was…well…an experience, I guess you could say. I for sure like our little town of Siem Reap heaps better than the dusty, full of people, hustle-bustle, hot city of Phnom Penh, but it was a great change of scenery. Despite the somewhat uncomfortable beginning and the frustrating ending with Jasmine’s wallet being stolen, we had loads of fun. I’m already looking forward to taking our visitors-to-be there. Hopefully future trips will be less ‘eventful’ but equally adventurous and enjoyable.

Hope ya’ll have a wonderful night and sweet dreams as I head off for English class. =) Until next time…

1 thought on “Trippin’ With the Girls”